Ordinary beryl is generally greyish-white and more or less opaque. The most sought-after gem variety is emerald. Its relatively low refractive index gives it a vitreous lustre.

Within emeralds, inclusions can be observed consisting of tiny channels or irregular cavities containing a liquid in which a fragment of halite (salt) sometimes floats. These inclusions form streaks that interfere with light and give the stone an appearance that is sometimes called the “garden of emerald”. These very particular inclusions make it possible to distinguish between natural and synthetic stones. 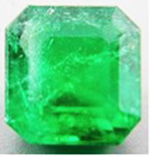 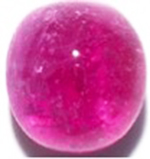